Pickleball – chances are you’ve heard of it but maybe you’ve wondered … just what is this “new” sport now billed as “the fastest growing sport in America”? And why is it so popular?

Pickleball, in fact, is not “new” at all. It was invented in 1965 by three dads summering with their families on Bainbridge Island. The sport has seen amazing growth in popularity in recent years particularly with older adults. In Florida, at The Villages, one of the South’s largest retirement communities, over 200 pickleball courts have been built to meet the demand of 55+ adults who are attracted to the social and physical attributes of the sport. 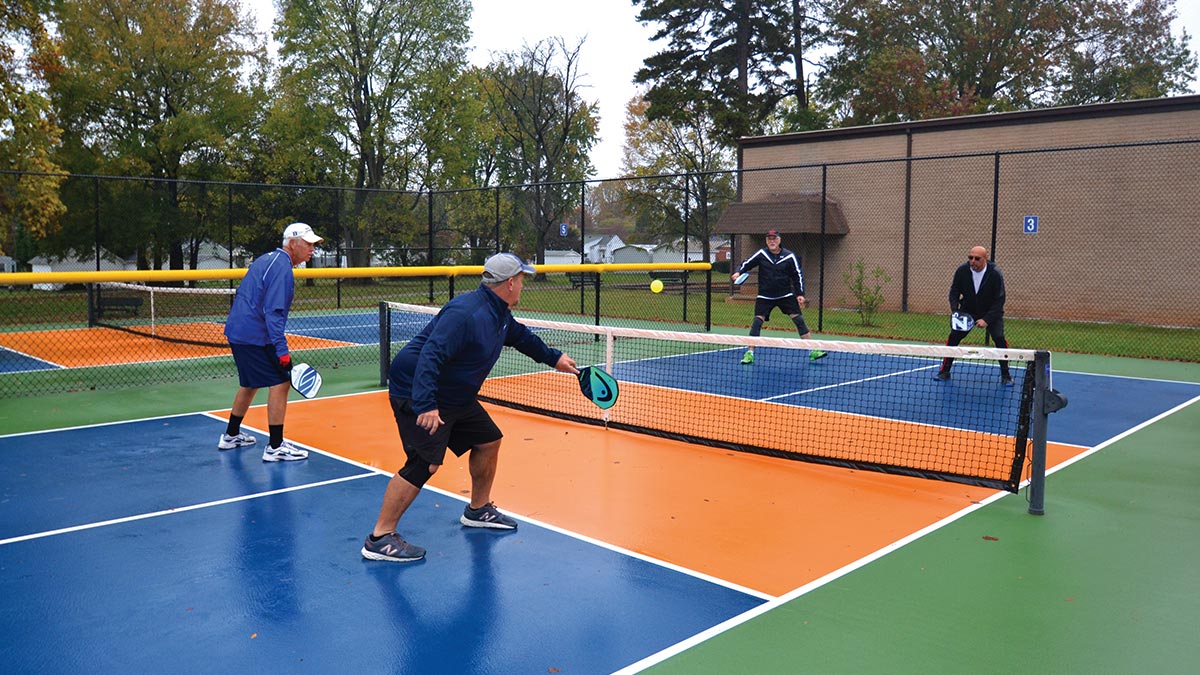 Take Rick Dodson. He’s a recent transplant to the Carolinas from South Florida. He fits a typical profile (if there is such a thing) of today’s younger 55+ demographic; he’s still happily engaged in the working world as the Chief Operations Officer for Margolis Healy, a national professional services company. Thanks to telecommunting, he’s able to work from anywhere in the US so he decided to relocate his wife Deb and two sons to the better climate and lifestyle of the Carolinas. He brought with him an avid passion for the sport of pickleball. “Saturday and Sunday are my heavy days to play, although I try to get out as much as I can during the week,” he says, and even though there are regular groups that play on the weekends “there are always folks available to play at the rec center.” Playing at the recreation center means traveling across town to the public courts for Dodson, however, he is working on turning under-utilized tennis courts in his own neighborhood into pickleball courts … a project that has met much excitement across multiple age groups in his neighborhood. 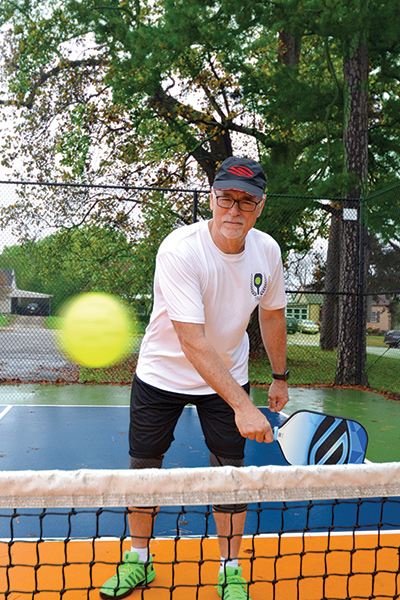 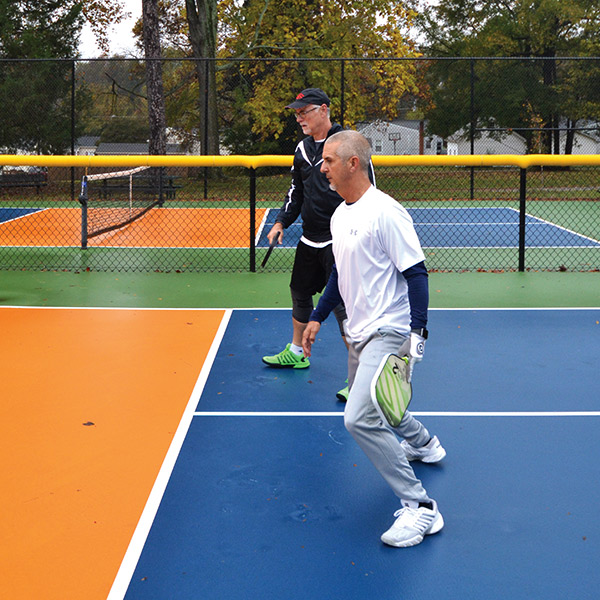 Increasingly, new communities like The Enclave at Hidden Lake, an Eastwood Homes community in Youngsville, and The Landing at Rocklyn, a Freedom Homes community near Winston-Salem, are building new pickleball courts into their community plans. Likewise, savvy gyms are adding pickleball to their slate of offerings. Sportscenter Athletic Club off Samet Drive in High Point has recently added no fewer than 6 beautiful pickleball courts in time for fall play. They report that pickleball is very popular among their members that are avid racquetball players. The growth in popularity of pickleball shows no signs of abating anytime soon. Aficionados cite several reasons the most notable being that pickleball is easy on the body and easy to pickup. It’s reported that most anyone can feel like a competent player in their first session on the court. The rules are fairly simple and it is not an “extreme” sport. That’s not to say it’s not great exercise…it is…it’s just not at the exertion level of say tennis and it doesn’t require a great deal of practice to be competent as with golf. Also attractive is the social aspect of the sport. You can play doubles or singles and play is on a relatively small court as a pickleball court is less than half the size of a tennis court. Therefore, opponent’s are in somewhat close proximity to each other which makes for a more intimate experience. Also, pickleball can be as competitive as you want it to be. Play just for fun or enter the many tournaments that are available and rack up some bragging rights. Finally, the sport is addicting say those that seek to play many times a week. 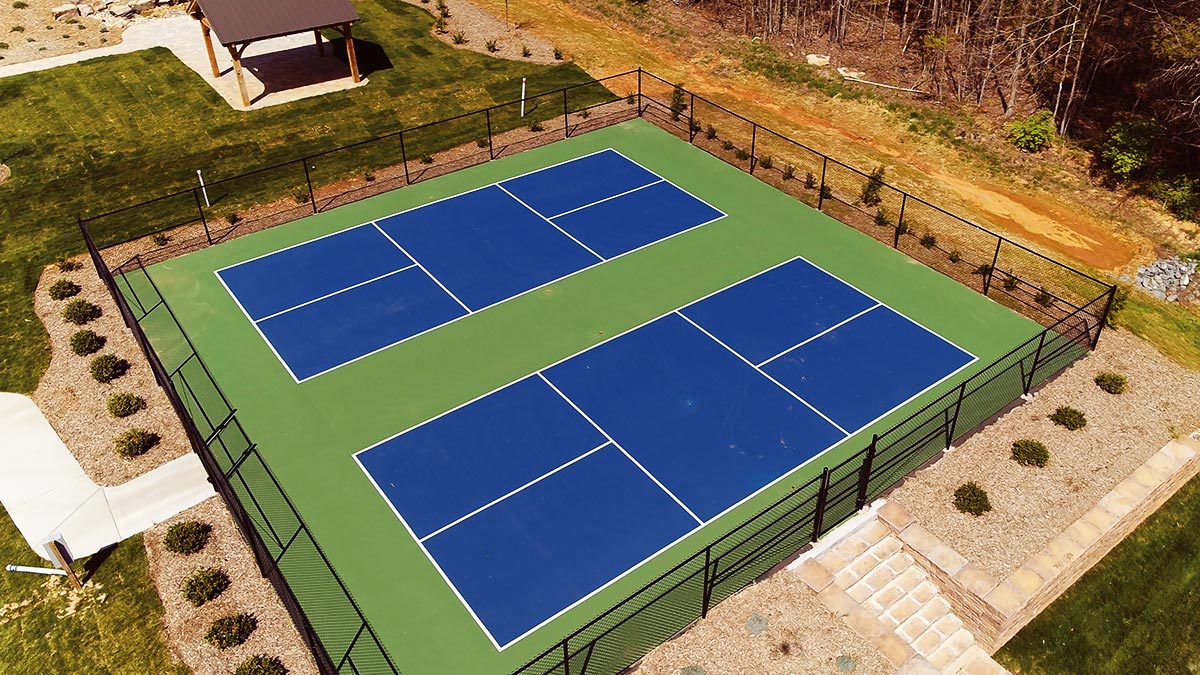 The Landing at Rocklyn, a Freedom Homes community near Winston-Salem held a clinic in October to introduce residents to the sport. Food Trucks were on-hand and many expressed excitement at the prospect of picking up a new activity. In a new home community like Landing at Rocklyn, Pickleball creates a perfect opportunity to met neighbors and establish new friends and a new social network. 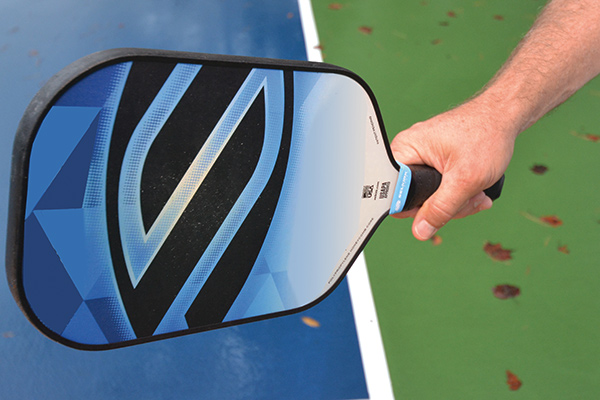 The most useful grip in pickleball is called “The Continental.” The fast-pace of pickleball makes a grip like the “Continental” useful because players can hit forehand or backhand without changing grip.

The best way to describe pickleball is as a combination of the games of tennis, ping pong and badminton. It’s a fast-paced activity which rewards quick reflexes but also a strategic sport that has been likened to chess.

Play begins with an underhand serve from behind the baseline to the opponent’s service area. The pickleball must clear the net and the “double bounce rule” means the ball must bounce once on each opponent’s side before a team may begin volleying in the air. The rally continues until one team hits out-of-bounds, into the net or allows the ball to bounce twice on one side. A player may not stand in the “kitchen” (the area closest to the net) unless the ball has bounced on their side. This eliminates spiking the ball. The fun comes in achieving fast-paced volleys until one team makes a mistake.