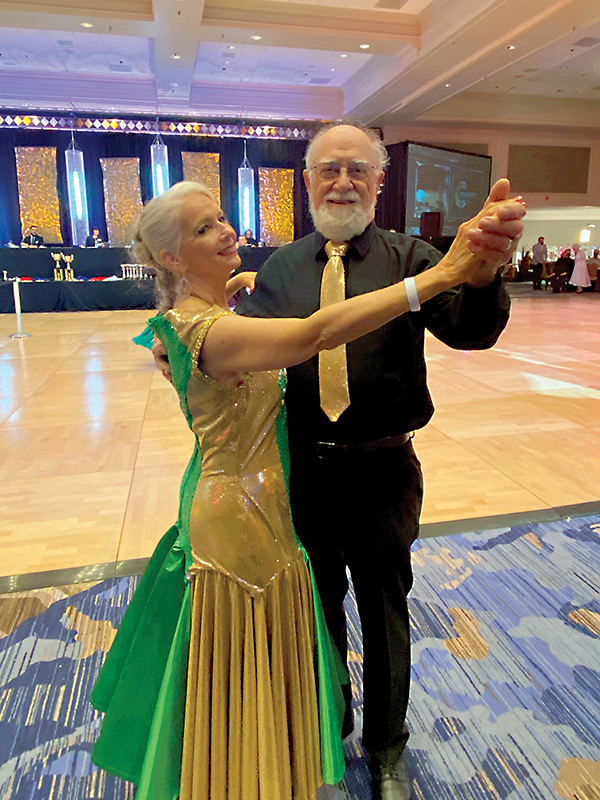 If you are like the typical retiree your friends probably do not mistake you for last month’s featured dancer on the television show “Dancing with the Stars.” In fact, when attending a wedding you may just be one of those who “sit this one out” because, even though you’ve always imagined how wonderful it would be to glide onto the dance floor with your partner and do a perfect Fred Astaire/Ginger Rogers routine … you’ve never gotten around to learning to dance. The great news is that it’s not too late. In fact, retirees, even those with the proverbial “two left feet,” are learning to dance in increasing numbers (as are the younger set including those still in high school). Aside from acquiring the skills to perform your own Fred Astaire/Ginger Rogers routine, learning to dance offers myriad benefits … some obvious and some not so obvious. The obvious: it’s good exercise and it makes you feel pretty cool when you can ballroom dance even moderately well. The other benefits, however, are arguably even more important. Ballroom dance has emotional, physical, and mental benefits that are immediate and far reaching. But more on that in a minute.

“Twenty-somethings” Jane Cozens and Brian Clements are engaged to be married and took up dancing a year ago in order to have something they could do “together” and so they’d be able to feel comfortable at events, like weddings, where there is an opportunity to dance. Jane considered herself as one who has the proverbial “two left feet.” But after two introductory lessons she and her fiancé fell in love with ballroom dancing and felt that it would be fun to pursue more social dancing. Says Cozens, they wanted’ “to learn how to dance with each other because we think of it as such an intimate experience between the two of us, with the teamwork, and it was something we wanted to do for ourselves.” A year later they are preparing for their first showcase dance. They were introduced to ballroom dancing by Katherine Hayes, owner of Adore Real Talent Dance Studio in Raleigh. The Adore Dance website proclaims that “anyone can dance.” We asked Hayes if that was indeed true and she replied “110%! It’s all about how the student learns and more importantly about the teacher understanding the student’s learning habits. Anybody and everybody can learn to dance…it’s just about taking the time to get to the goals that the student desires.” According to Dasha Chube, manager at Fred Astaire Dance Studio in Greensboro “everybody says they have two left feet. Our response is ‘we have two extra right ones in the closet, so we’ll exchange one for you!’ In reality the concept of “two left feet” doesn’t exist. For some, dance comes more naturally while for others it takes a little more concentration and focus, but anyone can be taught how to dance.” 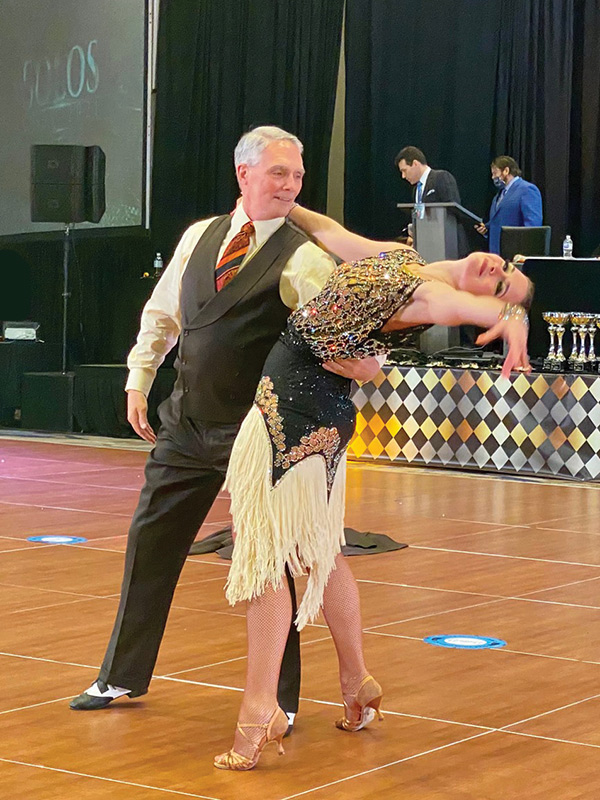 Chube says she has students ranging in age 4 to 95. “We had one person who, at 98, stopped ballroom dancing with us because she moved to live with her children. She’s still dancing … just not in our city any longer.” Traditionally, the older set, pre-retirement or retirement-aged folks have been the age group most interested in learning to dance, however, the trend, thanks to shows like “Dancing with the Stars,” is younger people coming to the sport. While media exposure may be increasing interest in dance among the youngsters, for the older adults, according to Chube, “it’s more about being at the point in their lives where they now have the time to devote to dancing and they don’t want to “sit this one out” any longer … they want to participate in the fun. Students and instructors alike report that the first hurdle is getting over the self-consciousness of learning a new skill. Once you get past that, learning really takes over. And, although remembering the dance steps is key to the entire process, muscle-memory soon takes over. Cozens puts it this way, “Once you learn how to instinctively move your feet you can seamlessly transition through the various primary dances. Some of the dance steps apply to multiple dances. For instance, there is a dance step you can perform in the Waltz but also the same step in the Foxtrot.” Many students report that it takes a couple of months before things “click” and the lessons take on new meaning. And, according to Cozens, “It’s a great experience because we’re learning but it’s also a ton of fun.” 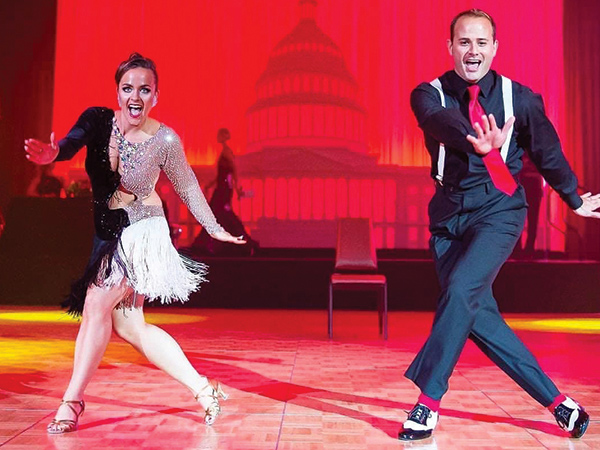 Dance as a Sport

While couples like Cozens and Clements came to ballroom dancing to enhance their relationship many have discovered other exciting facets that ballroom dance provides. Ballroom dancing used to be the domain of couples and single ladies. Today, that’s still true but, increasingly, single men are coming to ballroom dance in great numbers. Many of these folks are drawn to ballroom dance for the social aspect of it but also are discovering the joy of perfecting a sport and art form. Bob and Meredith Jackson moved to the area about 8 years ago to be near family. Frequenting a favorite restaurant meant that after dinner they found themselves peering through the window of the Fred Astaire Dance Studio next door where they observed a magical scene of folks flowing across the dance floor. They were captivated and soon found themselves signed up for lessons. What started out slowly for them really took off once they decided on transitioning to one-on-one lessons. Fred Astaire Dance Studio offers multiple outlets for dance enthusiasts and while most patrons are learning to dance for the social, mental and physical benefits mentioned above nearly 30-40 percent of their students uncover a desire to compete in Amateur divisions and beyond. Meredith Jackson found that perfecting her moves and learning more intricate steps and dances appealed to her on many levels and has engaged in Amateur division competitions. Trips to competitions are an important part of the offerings at Fred Astaire Dance Studios, and competitions have been held from Las Vegas to Russia. Chube explains, “these trips are primarily social trips with an element of competition. We compete but we have fun!” On one trip we danced in the Kremlin!” Meredith Jackson competed at a competition in Las Vegas with husband Bob at her side as the chief cheerleader. Bob has been slower to embrace the idea of competition but is no less an avid participant in the sport. He will dance his first Showcase In October. The health benefits of ballroom dancing are myriad. The physical benefits are obvious; dancing provides a cardiovascular workout, it strengthens muscle tone which improves balance and it promotes flexibility. The mental side of the sport is equally impressive. Remembering dance steps, communicating with your partner, and navigating the dance floor all help promote mental agility. And, dancers appreciate the benefits that they receive from the sport both mental and physical. 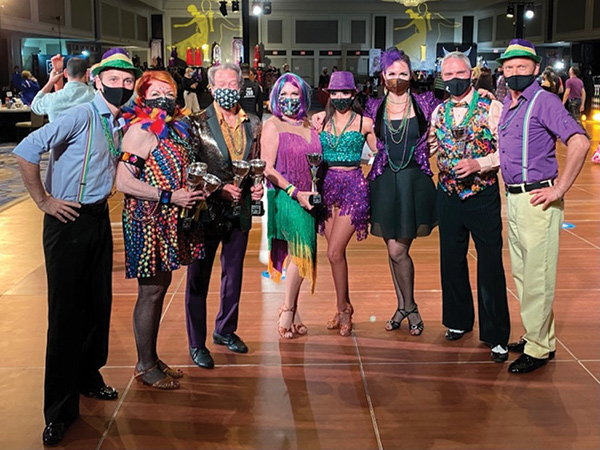 A common thread between instructors Hayes and Chube is an “all-in” love for what they do. They exude passion for sharing and teaching the art and sport of ballroom dance … and it’s contagious. Talk to either one for a few minutes and you too, want to be part of what they preach.

The beginner programs each studio offers are typical of the industry with deeply discounted introductory lessons, and then the offerings proliferate from there with every option from one-on-one lessons to couples lessons to group lessons and combinations of both.

Ballroom dancing is unique. It is art. It is sport. It pays dividends that are mental, physical, and emotional … and, it’s just plain fun. Maybe it’s time to stop “sitting this one out.”