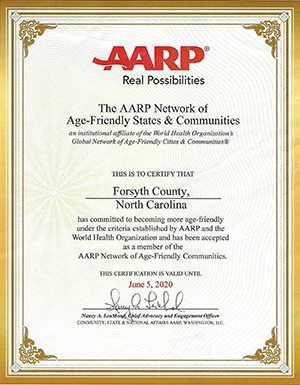 With nearly a quarter of the state’s residents expected to be age 60 or older by the year 2030, Forsyth County took an important step to become a better place to live for people of all ages. In June, the county applied for the World Health Organization’s status of “age-friendly” by joining the AARP Network of Age-Friendly Communities.

The AARP Network of Age-Friendly Communities helps participating communities become great places for all ages by adopting such features as safe, walkable streets, better housing and transportation options, access to key services, and opportunities for residents to participate in community activities.

Forsyth now joins neighboring Guilford as well as Buncombe, Mecklenburg, Orange, and Wake Counties, as areas working on an “age-friendly” designation. The Town of Matthews is also a member. All of these areas hope to remain vibrant and growing as North Carolina’s population both increases and ages.

“Well-designed, livable communities promote health and sustain economic growth, and they make for happier, healthier residents—of all ages,” said Lee Covington, executive director of Senior Services, Inc. of Forsyth, who has been a strong advocate for this initiative.

By joining the AARP Network, Forsyth County declared its commitment to a continual cycle of improvement in the eight domains the World Health Organization (WHO) has identified as influencing the health and quality of life of older adults: outdoor spaces and buildings; transportation; housing; social participation; respect and social inclusion; civic participation and employment; communication and information; and community support and health services. 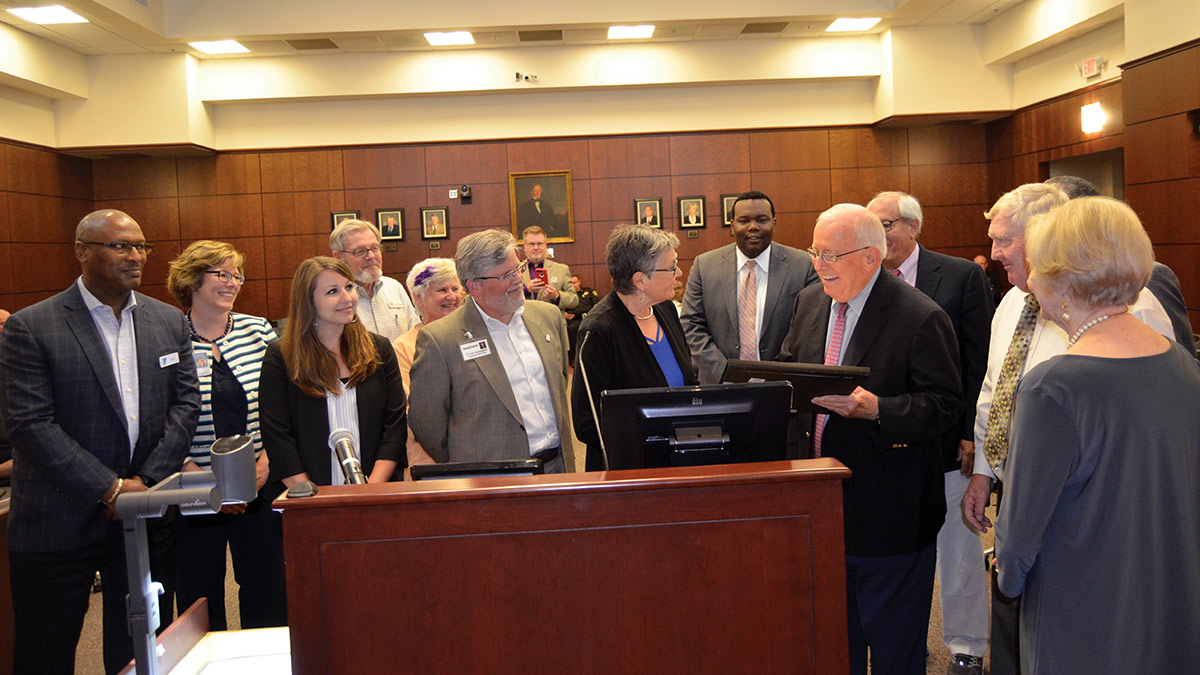 At a community forum hosted by AARP in June, Winston-Salem Mayor Allen Joines explained that when it comes to setting priorities, hearing from older adults is essential. “There are a number of ways for people to provide feedback,” he said.

When it comes to parks and open spaces, the mayor explained that one good way to weigh in is through the senior counsel of the Department of Parks and Recreation.

“Our age-friendly initiative is based on collaboration,” said Mark Hensley, AARP associate state director for the Triad Region. “A broad group of stakeholders have come together from non-profit organizations, businesses, government agencies, community partners and, of course age 50-plus residents. We will work together to assess our needs and to identify both short and long-term priorities.”

When it comes to business and economic development, Hensley said, “Aging can be a new engine for innovation, business development, and employment growth in the region’s economy. Opportunities abound in this space to support and facilitate healthy and active aging on the one hand and to care for the frail elderly on the other.

“Forsyth County is helping lead the trend of communities in the U.S. that are preparing for the rapidly increasing number of older adults. Here in North Carolina, by the end of the next decade, 90 of the state’s 100 counties will have more people ages 60-plus than those 18 and under. With Forsyth’s participation, over 3.75 million North Carolinians live in areas working to become age-friendly,” he added.

The AARP Network of Age-Friendly Communities is an affiliate of the World Health Organization’s Age-Friendly Cities and Communities Program, an international effort launched in 2006 to help cities prepare for rapid population aging and the parallel trend of urbanization. The program has participating communities in more than 20 nations, as well as 10 affiliates representing more than 1,000 communities.