Jekyll Island – Off the Beaten Path

Let’s face it… we are spoiled. Living in central North Carolina we have access to mountains and beaches just a short drive away. And each destination has many different personalities from an arts-centric trip to Asheville to a fishing trip to Ocracoke. Yes, we are spoiled and it’s difficult to justify leaving the Carolinas to vacation but every now and then… you gotta do what you gotta do. 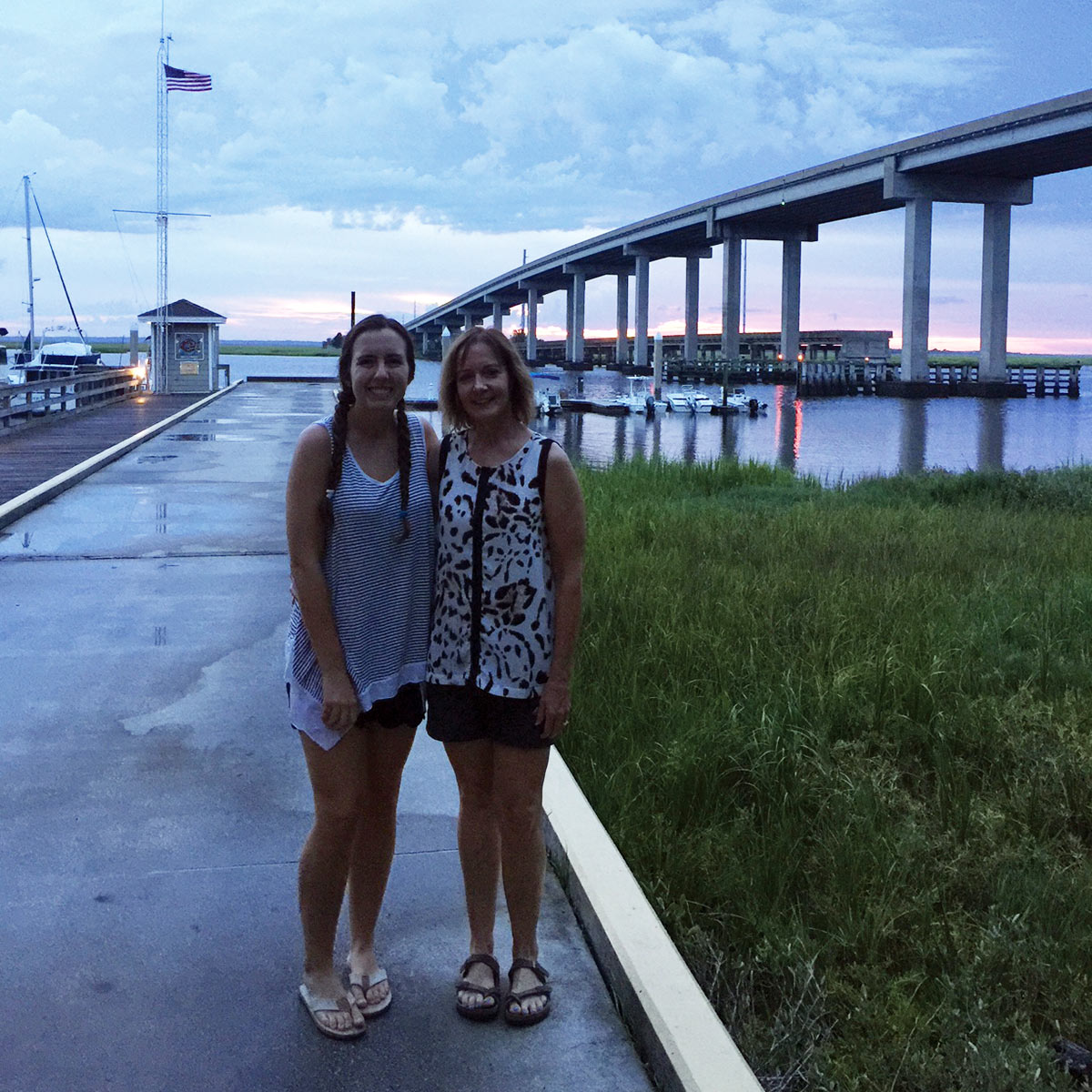 Zachry’s Riverhouse provides diners with a view of the marina, waterway, the island’s only bridge, and a sunset. But the seafood is the real reason to visit.

For my family and I that meant venturing south to the Georgia coast to Jekyll Island, which lies just south of St Simons Island with its many upscale and wonderful resorts. Glitzy resorts is not what you’ll find on Jekyll. Jekyll is decidedly “laid-back”. On Jekyll the order of the day is a golf cart (they call them “Red Bugs”) or a good bike. The island is incredibly bike-friendly with bike paths, paved and unpaved trails and cycling-friendly roads everywhere. You can circumnavigate the island on bike if you’re up for about a 20-mile jaunt, but most everything you want to do or see is much closer than that.

Much exploration awaits and there is plenty to keep kids or grandkids engaged as well. A large waterpark on the island seems out-of-place as Jekyll Island is a state park owned by the state, so development is very tightly limited and controlled. Pristine beaches and maritime forests far outnumber hotels and restaurants. On the north end you’ll find Driftwood Beach which is a sight to behold and perfect for a picnic lunch among the massive driftwood on this secluded stretch. There are a lot of photo opportunities here and the scene changes constantly with the changing light of day. 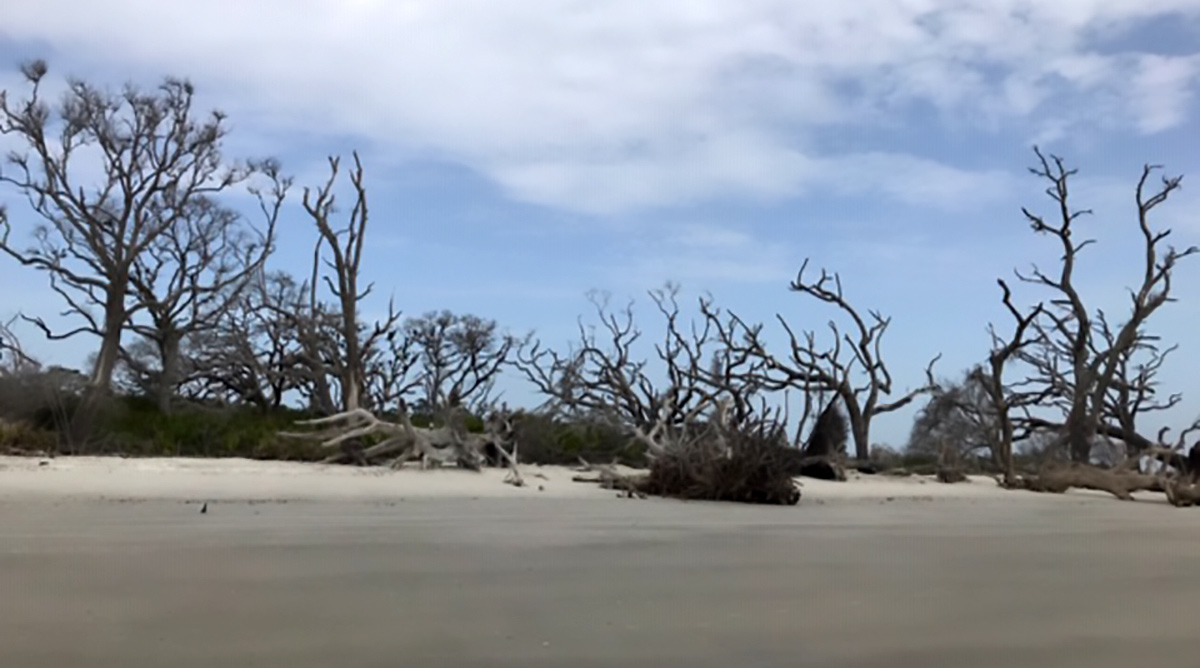 Driftwood Beach is a wonderful place to take pictures or just enjoy the beach and a picnic lunch. 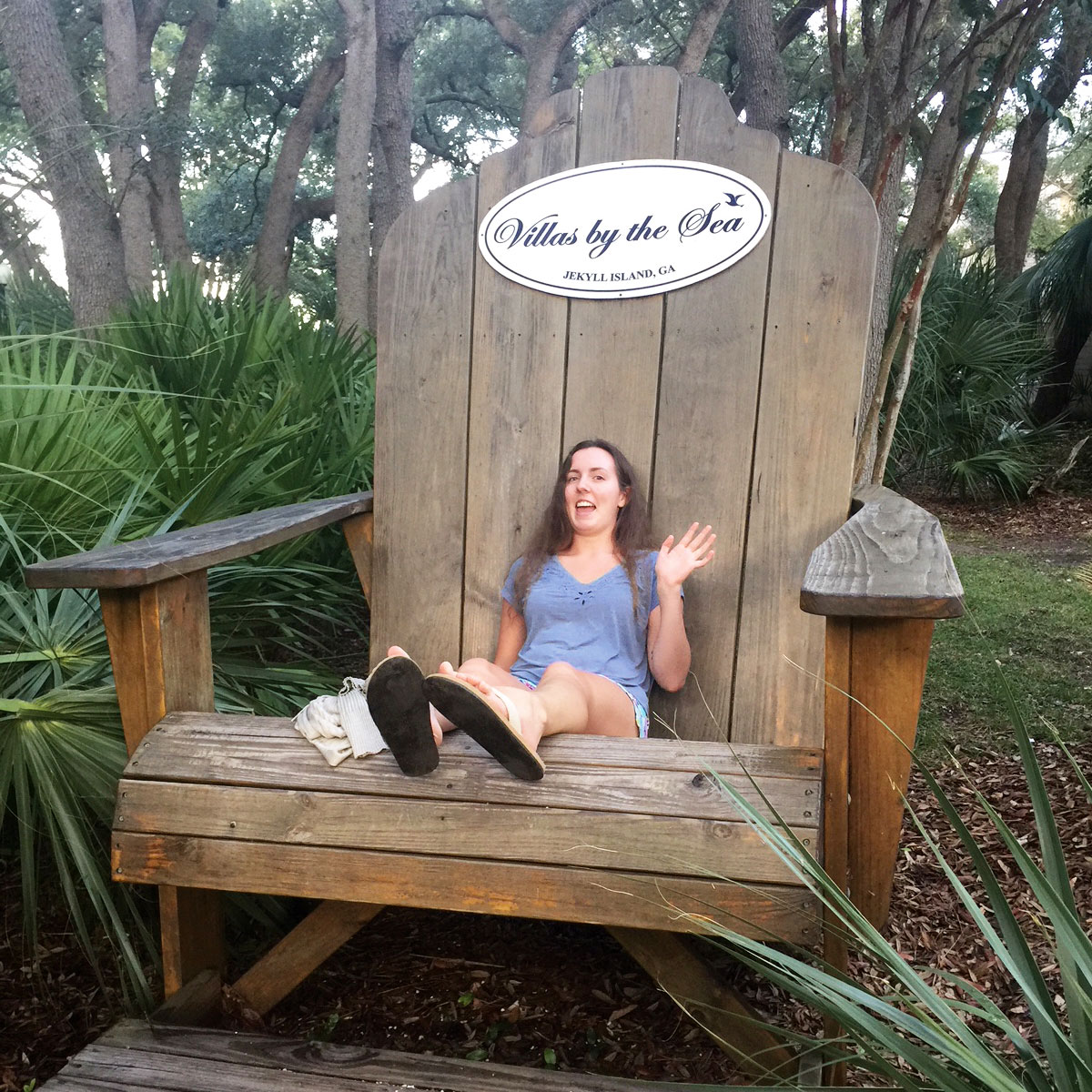 Driftwood Bistro is located within the Villas by the Sea community. Fortunately, the chairs inside the restaurant are more appropriately sized for diners.

Fishermen (and Fisherwomen) seem to enjoy a large fishing pier on the sound side of the north end of the island but if your interest is more in eating seafood than catching it you won’t be disappointed on Jekyll. There are some tremendous dining “finds”. Driftwood Bistro is one. This restaurant is oceanside but has no view to speak of. What is does have is incredibly fresh seafood and other dishes with large portions at below market prices. In fact, regardless of which daily special you order on the menu, the price is the same. The owner told us his goal when opening the restaurant years ago was to provide a dining establishment where vacationers could afford to eat every day of their visit to the island. The food was excellent. As the name implies it is located adjacent to Driftwood Beach on the north end. Another great find was Zachry’s Riverhouse located at the marina on the opposite end of the island. We were seated outside on the deck under the tree canopy… but it was comfortable and the seafood was outstanding. And we were afforded a fantastic view of the bridge, the waterway and marina, and an amazing sunset. What a combination!

There was so much to do on the island – it really competed with our goal of some quality “beach time”. We opted to visit the Georgia Sea Turtle Center. This is a working lab doing some great work to save and promote the sea turtle population. Well worth the $9.63 adult admission, you get an upclose look at lots of turtles in rehab, and you gain a lot of knowledge of these wonderful creatures in the process.

There is a “renovated and reimagined” history museum, Mosaic, which gets favorable reviews, but we opted for touring the historic Jekyll Island Club Resort. Established by the titans of industry around the turn of the century it served as a winter playground for the J.P. Morgans of the world and was billed, at the time, as the richest, the most exclusive, the most inaccessible club in the world. Largely abandoned after WWII, it fell into considerable disrepair, but has since been restored to its former glory. The resort now is an exclusive inn within a perfectly manicured old southern plantation, with many of the historic homes restored for viewing, or converted to art galleries or shops.

Golfers will find Georgia’s largest public golf course with 63 holes across four courses. Tennis is also a draw of the island with 13 Har-tru clay courts situated under live oaks draped with moss.

It costs $8 to drive your car on the island, or if you can arrive by small plane there is a 3,000 foot airstrip in the center of the island and you can bypass the $8 toll. However you get there… you’ll be glad you made the effort…. even though… it really is tough to beat our Carolina beach and mountain getaways.